Today more than ever, the digital advertising market is suffering from a lack of transparency and an extremely high concentration rate. Faced with these difficulties, a solution is sometimes presented as providential: the so-called blockchain technologies. So, is this a mere trend, or a genuinely viable solution? fifty-five takes stock for you.

Even the French football team Paris Saint-Germain has fallen for it! As the digital ecosystem’s latest trend, the blockchain is becoming a commonplace. Everyone talks about it and many actors have invested in it (large corporations, start-ups, governments and individuals alike). To take a recent example from a report published last December, French MPs recommended that 500 million euros be invested in this area to “make France a Blockchain Nation”. However, this technology remains a mystery to many people and the term ‘blockchain’ itself is often misused. This is particularly the case for the PSG project described above. So, what is the blockchain all about?

Blockchain, a technology that allows decentralised, disintermediated and unforgeable transactions

Of course, blockchain technology is a vast and complex subject. It would therefore take much more than a few lines to explain precisely how it works. Many websites or resources exist on the subject and more or less concisely present this technology. Our primary challenge is first to understand the logic behind it in order to better appreciate the added value it could bring to the digital advertising sector.

A relevant and recurrent analogy presents the blockchain as “a public, anonymous and unforgeable accounting ledger”.

It is important to note that blockchain technologies can take many forms and have a wide variety of uses. It is hence difficult to establish an exhaustive classification. However, we can identify some common characteristics. Overall, these technologies are intended for storing and transmitting information, allowing the creation of replicated and distributed registers, without a central control body, and secured thanks to encryption. That being said, these blockchain technologies can take several forms: public blockchain, private blockchain, consortium, DLT… Today, new technologies are still emerging (such as Directed Acyclic Graph), making the blockchain almost obsolete. In short, blockchain is a technology that is still being built and trying to find itself.

In this case, what is commonly referred to as blockchain is mainly a technological combination that allows decentralised, disintermediated and unforgeable transactions. But let’s be more rigorous in our definition – strictly speaking, the term blockchain refers to an encrypted database organised in blocks. Each block is juxtaposed with another in chronological order and includes a finite number of data. Thus, each new operation or transaction feeds a new block of data. Hence, there is no turning back: when information is added to the chain, it is almost impossible to delete it.

Once these points have been made, three major purposes of use can be identified when it comes to the blockchain:

And all this at a low cost and in a completely secure way! The advantage of the public blockchain is therefore to facilitate exchanges between individuals, without asymmetry of information or privileged stakeholders.

Could blockchain be a response to the difficulties of the digital advertising industry?

The online advertising sector has undergone many changes while blockchain technology evolved, since the late 2000s.

The first example that will surely come to mind is the dazzling emergence of programmatic advertising, progressively replacing negotiation-based traditional media buying. In 2017, programmatic advertising represented 62% of the display market, while it accounted for only 7% of investments in 2012. But despite having established itself as a standard, programmatic advertising is blamed: by multiplying the number of intermediaries, it has made the path between advertisers and their ads more complex. As a result, there is now a growing lack of transparency in the process, which is fertile ground for Ad Fraud on the one hand, and strongly undermines brand safety on the other.

Secondly, the online advertising market is characterised by an extraordinary concentration rate. Over the years, the two giants Facebook and Google account for 70% of advertising investment worldwide. Moreover, this trend is unlikely to reverse any time soon and we are witnessing an increasingly duopolistic market.

This is why, today more than ever, the online advertising industry is perceived as a secretive business; a highly concentrated sector with too many intermediaries in which fraud tends to proliferate. And as you may have noticed, these challenges perfectly match the ambitions of the blockchain. So would the blockchain be the miracle solution, to offer more transparency to the advertising ecosystem?

In any case, this is what a study conducted by the Blockchain Partner group in December 2017 might suggest. Halfway between a think tank and a consulting firm, this agency regularly publishes studies on the potential applications of the blockchain to address current issues. However, according to Blockchain Partner: “Online advertising ticks all the boxes of the sector typically transformable by the blockchain: a sector with multiple intermediaries; where part of the value is lost throughout the chain; and which lacks transparency”.

Several applications of the blockchain are therefore possible to meet the challenges of online advertising. Blockchain Partner lists four notable ones.

The four blockchain challenges in the online advertising sector

First, it’s all about compensating the growing opacity of the programmatic environment by promoting improved advertising traceability. To do this, the proposed solution is that of tokens: we speak of the advertising “tokenisation”. A token is a digital asset that can be issued and exchanged on blockchain, and that is impossible to duplicate or falsify. Thus, by associating a token to each ad, advertisers will be able to follow the transaction in real time online and know precisely how their budget is used. They will be able to know if their ad was seen, by whom it was seen and how their budget was used in the process. Such a solution could restore confidence and reliability in a sector that tends to lack it. In addition, advertisers could better analyse their costs and optimise the use of their budget. For example, the start-up MetaX is one of the pioneering companies hoping to popularize the blockchain in this process – its motto is to “unlock the blockchain for digital advertising”.

Secondly, the blockchain would allow to disintermediate trade. As we pointed out earlier, the value chain is tending to lengthen and is become more complex, in a digital advertising industry obviously dominated by giants Facebook and Google. In this context, and thanks to the blockchain, decentralised platforms could be chosen over traditional, centralised ad exchanges. This would allow advertisers and publishers to bargain directly on these platforms on a peer-to-peer basis. Some initiatives are working to make this happen. This is particularly the case for the Adshare blockchain, which claims to “easily support 100,000 transactions per second”.

Third, smart contracts could be used to prevent advertising fraud. The smart contract is a contract based on blockchain technology. The advantage of this contract is that it is perfectly unforgeable and that it is automatically executed if and only if the previously defined terms of the contract are respected. In the field of online advertising, this could allow advertisers to ensure that their ad is displayed on a space that meets predefined conditions (not on a pornographic or malicious site, for instance). Advertisers therefore ensure that their exposure meets their requirements. As a result, the process of selling advertising space could be automated without harming the advertiser’s brand safety.

Finally, a new business model can be considered with cryptocurrency mining. The mining principle is quite simple. It is a matter of making your computer available so that part of your computing power can be used to check the validity of a set of transactions in the blockchain. Once the whole set is validated, it forms a block that is added to the chain. In return, the “minor” is paid in cryptocurrency. Thus, the idea here would be for the publisher to make sure that visitors to his site mine cryptocurrency for him. This is what the Street Press site has been experimenting with since November 2017. While this business model alone cannot be viable, it could provide significant additional revenue for publishers who are increasingly dependent on Facebook and Google. Want to know more? Here is a Medium article about cryptocurrency mining operations! 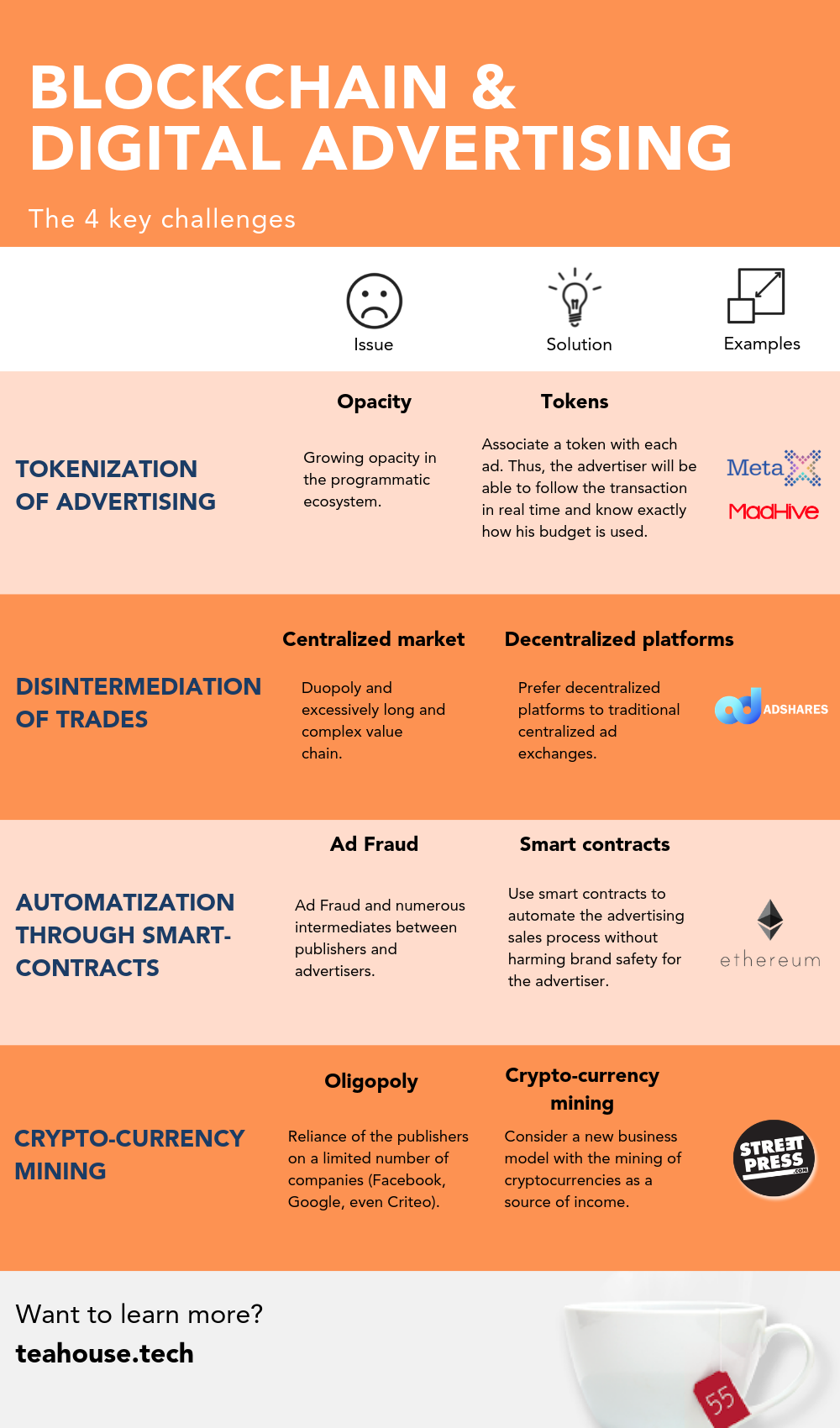 So, is the blockchain a miracle solution or not?

While the blockchain technology does seem to perfectly meet the needs of the online advertising industry, it yet remains a difficult solution to implement. Indeed, all the initiatives that have already been proposed to date are only at an early embryonic stage. No one knows how they will evolve in the coming years. Moreover, it is very unlikely that blockchain technology will not be regulated by public authorities and changes driven by certain companies in the relatively near future: the blockchain as we know it will certainly not be the same tomorrow.

In addition, for these initiatives to work, it should necessarily include all stakeholders in the online advertising ecosystem (advertisers, publishers and Internet users). However, such a project – which could require a global overhaul of the current system – seems difficult to achieve under the current circumstances.

However, a reform of the sector is necessary. In the words of Stephan Loerke, Executive Director of the World Federation of Advertisers (WFA), “In WFA we estimate that between 10 and 30 percent of digital media spend is actually subject to criminal activities. […] If nothing is done about it, we estimate that by 2025 digital ad fraud will be the second income in the world after drug trafficking. So there is a huge responsibility the brands have in taking the necessary steps in order to minimize ad fraud.” As such, a solution must be found! Indeed, as long as the blockchain technology remains credible, it must be considered seriously.

Many thanks to Dramane Djikine for his help in writing this article!

“In the U.S., Amazon represents 5 to 7% of the online advertising market”

Ads.txt: a first step towards transparency in the programmatic world