This year, the Google Cloud Next event took place in October, in London. Three full days of keynotes and workshops, gathering 8,000 guests and, to answer their questions, more than 1,000 Google Cloud technology experts.

Google Cloud Platform: a market leader with a strong community

Today, the Google Cloud Platform (GCP) community boasts 1 million developers worldwide, and Google is heavily investing in the industry. Over the past three years, the Mountain View firm has spent more than $30 billion on cloud infrastructure, Alphabet’s first investment area. These investments allow the company to provide all its cloud services via a huge network, 100 points of presence in 35 countries.

GCP is considered as the leader in the field of cloud and artificial intelligence according to the Forrester Institute. The Forrester Public Cloud Development Platform Wave is a benchmark for developers around the world to assess and compare the different features of cloud platforms. The report identifies six key points that highlight Google Cloud’s strengths, which can be viewed here. 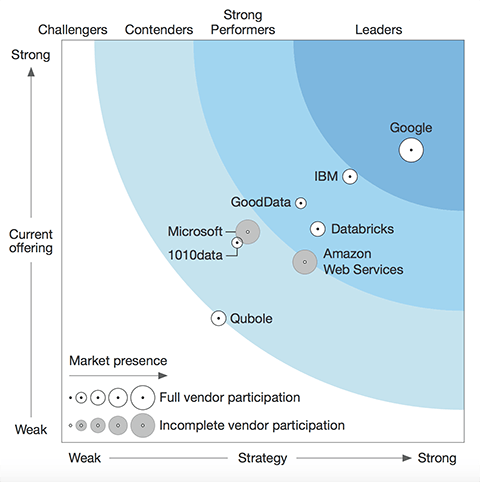 Today, more than 80% of companies use the cloud via multiple providers.

If we also consider the data used in private data centres (on-premise), the management of all this information becomes a consumer of various resources and expertise. Thus, server costs have decreased by 15% in recent years, while administration costs have increased by 80%!

How can this cloud fragmentation be managed? The promotion of standard tools that can be used in different environments helps to standardise practices and reduce costs.

During the conference, Google Cloud teams emphasised the importance of standardised open source solutions. There are various examples of technologies, some of which have been developed by Google, such as:

By the way, did you notice the general tendency of cloud tools to draw on marine world terminology, from docks to sails and helmsman. Let’s set sail to the cloud!

Artificial Intelligence: Google pulls out all the stops!

To develop its tools, Google heavily relies on Artificial Intelligence. Many teams are simultaneously working on different projects, including in Europe, London, Paris, Zurich and Berlin. Without realising it, we are already using Google services produced by Artificial Intelligence. For example, Gmail’s Smart Reply feature, introduced in 2017, automatically suggests replies based on emails received. 10% of these email suggestions are now applied by Gmail users!

Example of Smart Reply on Gmail, via Google Blog

The company also announced the arrival of the Smart Compose feature, which automatically completes emails when they are written.

To facilitate the implementation of projects using artificial intelligence and machine learning, the Google Cloud Platform presents three assets by which it:

In a nutshell, what was Google Cloud Next’s goal in 2018? To display the right set of circumstances for open source solutions and facilitate access to data processing incorporating machine learning. It is also a way to foster the adoption of the Google Cloud Platform for companies, even non-cloud specialists, either exclusively or alongside other cloud solutions and on-premise infrastructures. Google offers solutions for all stakeholders, from developers and system administrators to data analysts and data scientists alike.