Since the start of the century, China has increased its GDP more than tenfold*; a rapid growth rate which has been boosted by significant digital development. Technology now occupies a key role in the daily lives of the Chinese population and today the country is renowned for its numerous innovations in the digital sector.

The market is dominated by three key national players who are the ones calling the shots and all of this is without the help of the Western world. But who are the key players and are they genuine competition for GAFA? What are the defining features of the Chinese tech ecosystem?

Whilst the Western tech ecosystem is mainly influenced by American players (Google, Amazon, Netflix, Microsoft, Apple, Facebook, Uber, Airbnb, Tesla…), Chinese tech is dominated by players closer to home. The Americans all have their very own Chinese counterpart, with just a few slight differences:

Discover the list of all the companies belonging to these 3 giants.

The Chinese are big fans of everything digital and mobile-related, and a strong consideration for social factors has been built into the very heart of platforms like WeChat and QQ. This has brought about the development of a new and unique business model, the Social+. Social+ is a powerful tool which allows brands to create a large community in a short space of time, thanks to viral growth mechanisms or gamification. Media, online stores and other industries make use of an already existing social network, or even create their own application, and use the daily social interactions of their users to boost their business. For example the mobile application Pinduoduo has rallied more than 300 million users in under 3 years! Its strategy? Give discounts to users who share their offers or products using WeChat and encourage their friends and family to buy or sell on the website. 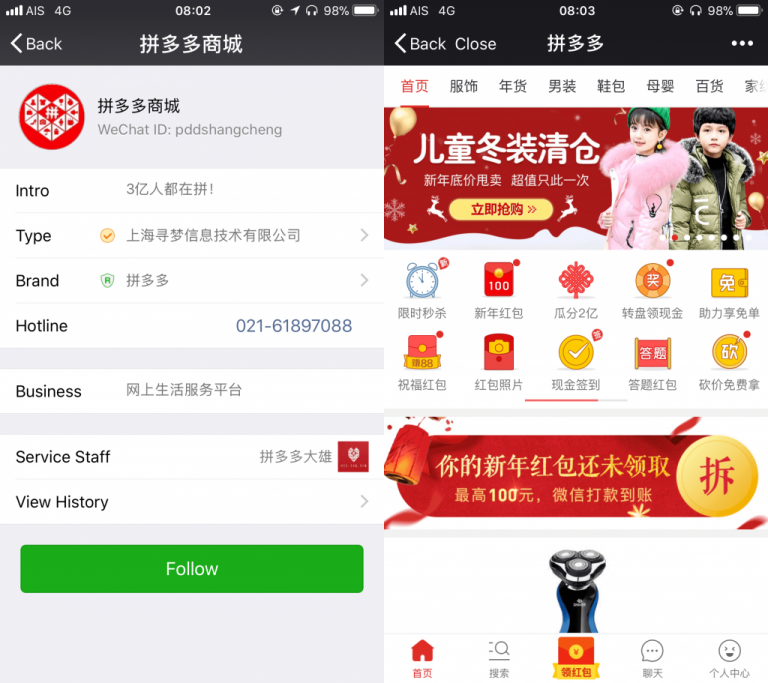 ‘New Retail’ is a second key concept in Chinese customer experience. Developed by Alibaba, it is an enhanced version of the notion O2O (Offline to Online), which fully merges online and offline channels but the digitalisation of retail outlets needs considerable investment. The supermarket Hema, created by Alibaba, gives customers the possibility to do their shopping without having to go to the till, as they can scan and pay for their items using their mobile. Using the same approach, Alibaba has also decided to reinvent the grocery stores Ling Shou Tong, by integrating cloud-computing technology and mobile payment in over 6 million stores across the country.

And finally, even if the sharing economy has already shown what it is capable of achieving in the West, China has taken the concept just a tad further. In the mobility sector, DiDi the Chinese taxi and carpooling app service has bought Uber in 2016 and has already made a name for itself. Furthermore, since 2016, more than 40 services specialised in shared (and connected) bicycles have been created across the country. After the expected state of euphoria followed by a period of market concentration, ofo and Mobike now own 90% of the shares in this new market, and are beginning their international expansion. In reality, anything or almost anything can be shared in China; from umbrellas to mere basketballs, anything and everything can be rented for just a few hours!

When the government regulates the Chinese Tech industry

The Chinese government’s interventionism often regulates the industry. The government forces legislation to evolve with a more long-term perspective, just like in 2017 with its cybersecurity law which ensures the protection of users’ personal data and controls the transfer of this data internationally. In the last two years, certain laws have come into effect in the tech sector (Source: China Internet Report 2018 by the South China Morning Post):

Aside from the legal aspect, Pekin also protects its start-ups by investing more than 15 billion dollars in the technology sector in 2018 (Reuters), and has therefore helped the country make unprecedented technological progress in a considerably short period of time. China hopes to become the leader in Artificial Intelligence, ahead of the United States by 2030, with the construction of a park for over 400 AI specialised companies in Pekin. The rest remains to be seen if China can meet its objectives, but one thing is for sure; China has not ceased to astound us with its tech innovations!

Translated from French to English by Katie O’Dowdall.

Web Analytics in China: from good to great analytics behind the Firewall