On Monday, 3rd June, the McEnery Convention Center in San josé was crowded out. According to an established tradition, Apple met with 5,000 lucky developers on the occasion of its usual mid-year tech conference. 3 days of plenary sessions and workshops to sharpen one’s technical knowledge about Apple’s platforms, all the while learning more about new and upcoming software, hardware and services.

The Keynote and its presentations were punctuated by numerous announcements about the firm’s applications and services. Here’s a review of some of them.

What’s new on the service side: farewell iTunes, and hello Sign In!

It’s the closing chapter for iTunes! This multimedia player—which is set to offer podcasts, music and film purchase or rental—is leaving macOS after 18 years of good and loyal service. It will be replaced by 3 different apps—Music, Podcasts and Apple TV—that already allow you to listen to your music, podcasts and watch your favorite movies on iPhone and iPad. Therefore, managing and synchronizing multimedia content on iDevices will be done directly from your Mac’s Finder.

This shutdown of iTunes once again proves Apple’s shift in content distribution, from a single-purchase model to a subscription-based one. 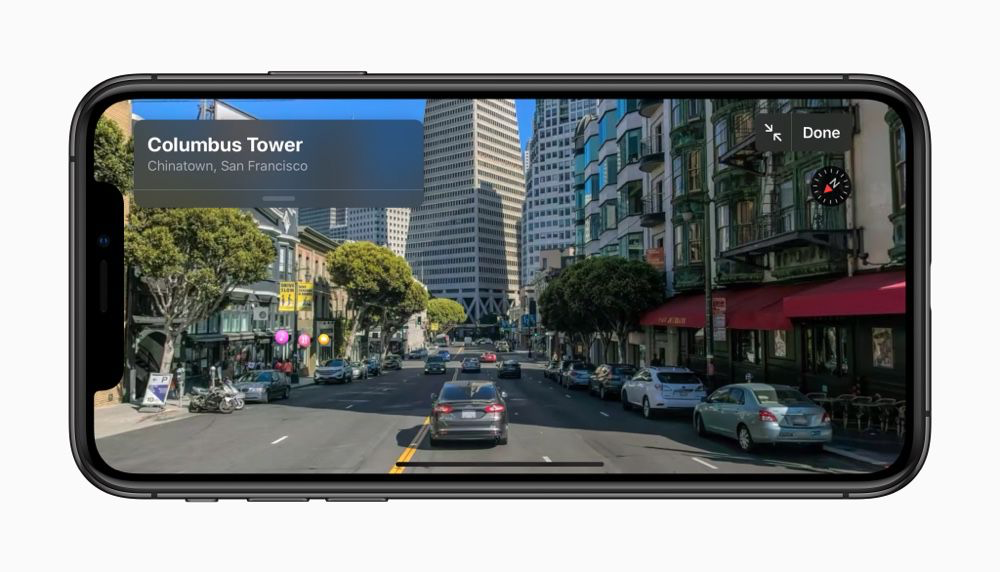 Another announcement worth noting: the Cupertino firm presented “Apple Sign-In”. This feature will allow users to connect to their favorite services and apps without having to create a new account or enter a password, which will be replaced by Face ID and/or Touch ID. With this new feature, Apple intends to market a similar alternative to what Facebook and Google offer, all the while preventing the transmission of users’ personal data. Instead of giving your email address to the website, app or service that implements it, Apple Sign-In will automatically send a fake, automatically-generated address that will be linked to yours, and you’ll get to choose the data you want shared.

Available as an option on Android, this feature will be a prerequisite for any iPhone, iPad or Mac application that supports SSO (Single Sign-On) account creation, another requirement that constitutes a teeth-grinding issue in the developer community. 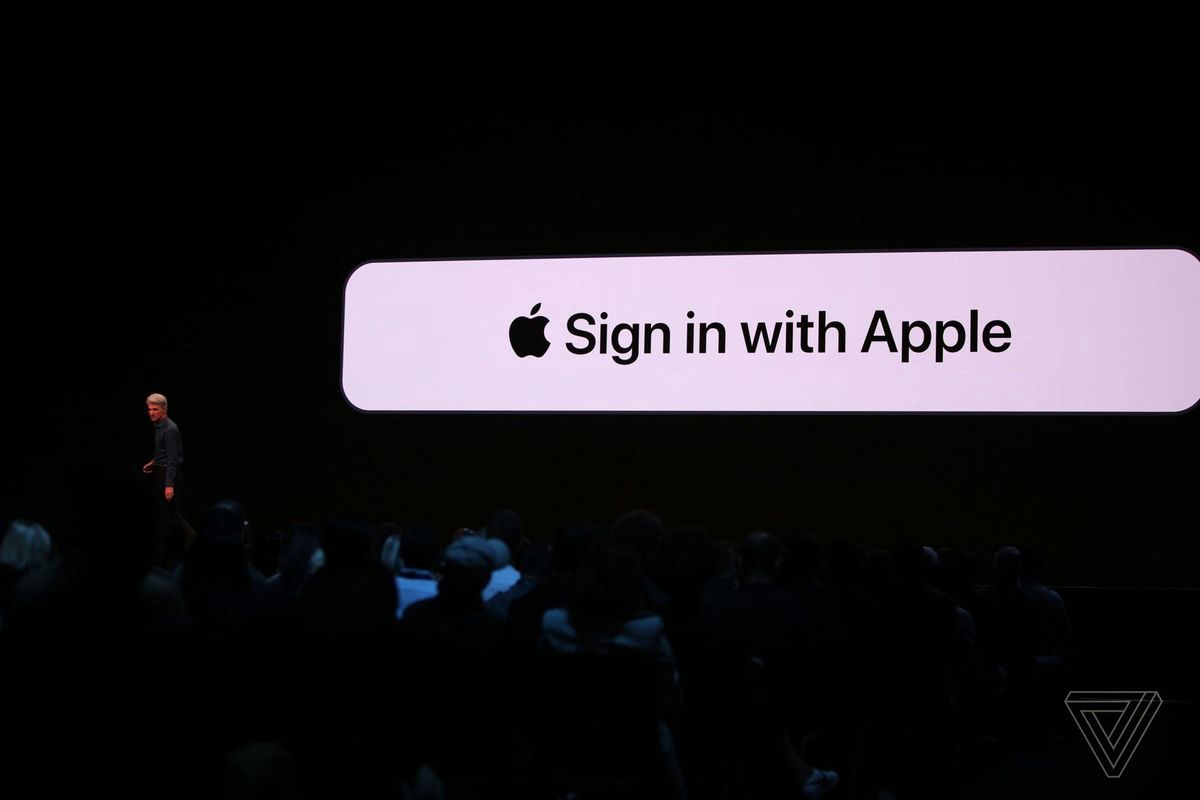 Always in the interest of protecting the data and privacy of its customers as much as possible—only this time, with regard to geolocation—Cupertino took the opportunity to review the management of its applications: you can now share your location temporarily, and if you share it continuously, a notification will inform you of how the application has used your data on the go. To avoid ruining anything, Apple has limited the possibility of applications determining your location using Wi-Fi or Bluetooth without your consent.

Finally, Plans— Apple’s mapping application—is getting more detailed and accurate maps in future versions of iOS, iPadOS and MacOS, initially in the United States. Above all, it now has enough visual data to be able to offer its own “Street View” mode: The “Look Around” feature will provide a more detailed view that allows you to walk virtually through the streets. The application will also make it possible to sort your ‘favorites’ into collections and lists of places that you can share with your friends and family… a service that will compete with other publishers like Mapstr, for instance.

Let’s talk about the new version of TV OS now. In addition to a completely redesigned home screen displaying widescreen previews (a feature also found on Netflix), the ‘made in Cupertino’ TV box now manages several user accounts: the opportunity for family members to be offered suggestions for personalized series and movies—isn’t that Netflix?—without forgetting music, thanks to a better integration of its Apple Music streaming service. 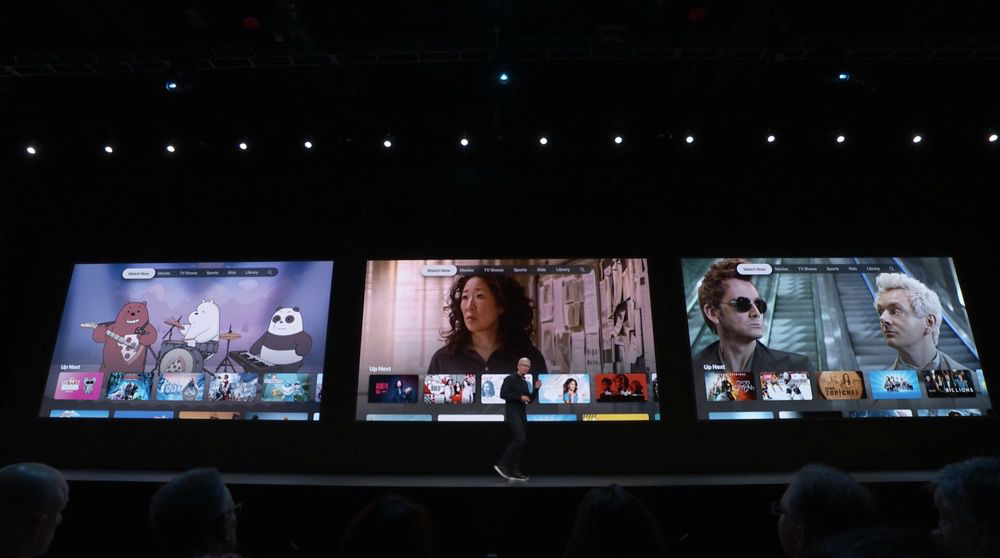 Gamers have not been forgotten, as Apple TV now supports the most popular controllers on the market, including the famous Xbox One and Playstation 4. This compatibility will allow Cupertino to diversify its video game offer by presenting—via its Apple Arcade service—more traditional titles already available on other consoles. A great opportunity to compete with Microsoft, Sony, Nintendo and newcomer Google on the video game market.

After Tim Cook, it’s Kevin Lynch—VP Technology—who takes the stage to talk about WatchOS. The new version adds new, simple and detailed dials, and will also include unprecedented applications such as a dictaphone, audio books and a calculator. In addition to a calculation feature, it includes 2 highly useful features for restaurant outings: tip calculation and bill sharing. 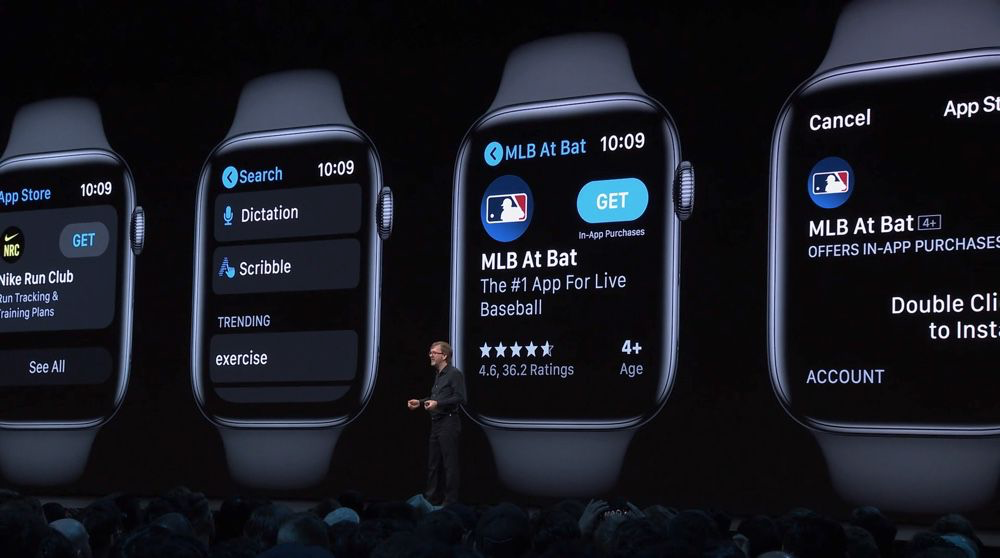 With WatchOS 6, applications now run independently. You no longer need to install the Spotify app on your iPhone to ‘remote control’ your music from the watch: you will now be able to stream your playlists directly from your Apple Watch, provided it has a network connection.

The autonomous character of these apps also announces the arrival of the AppStore on WatchOS, from which you can find all the apps with their full description, including through voice search!

With iOS 13, the system gains in speed as with Face ID, which reduces the time to unlock the device or apps that will now launch twice as fast. Apple has also reduced the weight of apps by half, reducing download times and updates.

After macOS, it is iOS’s turn to see the dark mode arrive on the iDevices, thus increasing user-friendliness in the dark. System applications, the control center and keyboard are now displayed in shades of grey and black to take it easy on your eyes (and help your partner get some sleep!).

Hallelujah! iPad has finally got its own OS

Claimed out loud by its users since the release of the first pro model in 2015, the iPad has finally acquired its own operating system. Going by the name of iPadOS, it brings with it a large number of features and shortcuts exclusively dedicated to tablets, with a particular focus on multitasking.

First of all, you can display an app on the side with Slide Over but, most importantly, you can switch from one app to another via Slide Over using your own multitasking. Similarly, you can share the same app twice on the screen; for example, in Notes, you can open a second note and display it next to the first one. iPad finally benefit from Mac’s multitasking behavior.

The Files app also brings its share of new features: column view, document preview and quick actions of the MacOS Finder are now available. Access to network directories and iCloud directory sharing are also on the menu, not to mention the use of USB sticks! Long awaited, this feature was the main barrier to the adoption of the iPad in a professional context.

Finally, the iPad will recover the MacOS version of Safari and automatically display the visited sites in desktop format, as is the case on computers.

With all its features, iPadOS takes the tablets to the next level and tends to increasingly reduce the border with them and the MacBook.

With Catalina, the Mac is becoming ever more similar to the iPad

Ever heard of Catalina, that island off the coast of the port of Los Angeles? It’s also the name of the new version of macOS (10.15) which, in addition to already embodying the new features of iOS 13 and iPadOS, has its share of features.

Starting with SideCar, a feature that allows you to use the iPad as an external display, or even as a graphics tablet with the Apple Pencil. This will replace the many third-party pay-per-view applications that already offered these features. 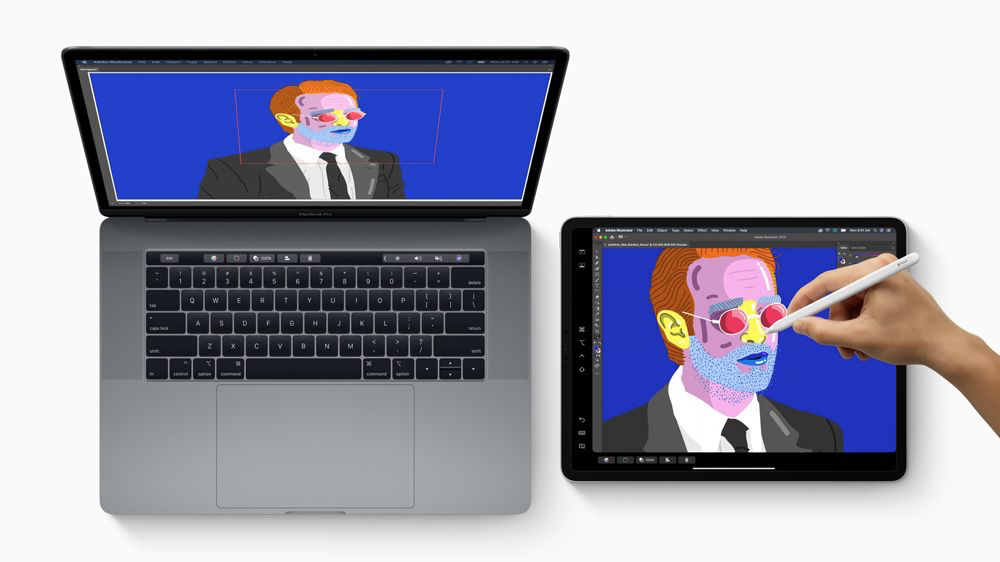 Similarly, the new “Locate My” application, which merges “Locate My iPhone” and “Locate My Friends”, is now available on macOS. Once iOS 13 and macOS Catalina are installed, the devices will occasionally transmit a kind of encrypted and anonymized Bluetooth distress signal. The surrounding devices will then be able to pick it up and relay it to Apple’s servers: you’ll be able to locate your iPhone or Mac, even if they are not connected to the network.

The Catalyst project, the official name of the late Marzipan project fire, allows you to import applications that are available on iPad to Mac without changing the code, and thus save valuable development time. Available today in Xcode, it is a great opportunity for publishers to offer their service via desktop with a native application, and for Apple to easily enrich its App Store dedicated to Mac devices.

There is no shortage of superlatives when it comes to describing Apple’s latest machine.

The central unit, with its utilitarian, almos abrupt appearance, is built around a simple steel frame. This frame has legs and handles, but above all forms the support on which modules are grafted. A huge radiator is topped by new Intel Xeon processors, surrounded by twelve slots for 2933 MHz ECC memory strips, allowing the Mac Pro to carry up to 28 cores and 1.5 TB of RAM (yes, yes, you read it right).

To accompany this racing beast, Apple offers a new 32-inch Retina 6K (6,016 x 3,384 px) screen. Called “Pro Display XDR” (for Extreme Dynamic Range), it incorporates the latest display technologies and offers brightness and contrast never before seen by the manufacturer. Of course, you can connect up to 6 monitors to your Mac Pro and work in an extremely comfortable way 🙂 ! 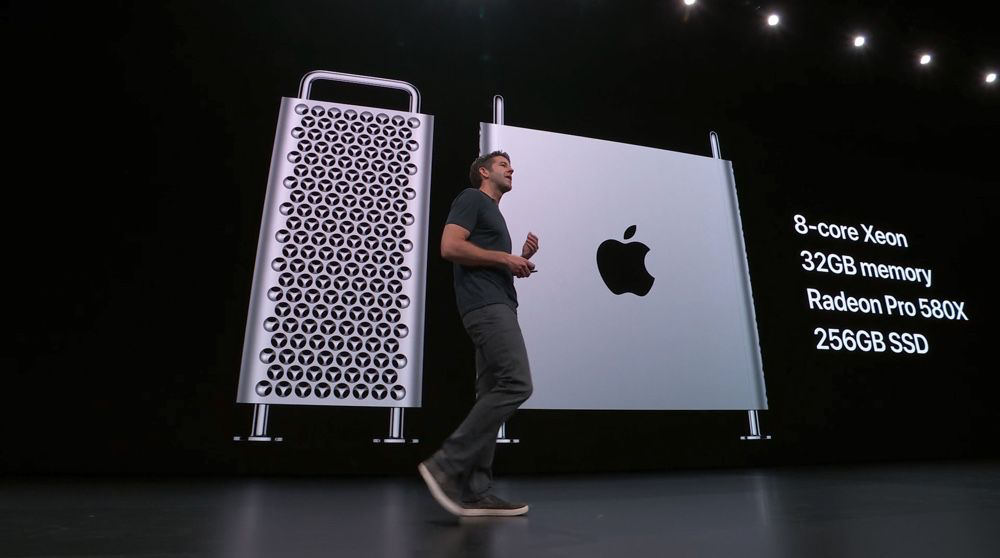 By unveiling its new standard, the Cupertino company wanted to show its ability to compete with the largest workstations offered by Dell or HP. Developers, photographers, graphic designers or filmmakers, the new Mac Pro and its Pro Display XDR screen will allow you to give free rein to your creativity and talent… subject to spending a minimum amount of $10,997 excluding tax!

What can we learn from this 2019 edition?

Both in terms of software and hardware, new features constituted the central focus during this opening keynote. Whether through its applications, operating systems or services, the Cupertino firm has finally taken into account the feedback from its customers to offer them an almost identical experience regardless of the device used.

It should also be noted that the positioning of privacy has been accentuated. After ITP’s numerous versions on its Safari browser and a privacy-oriented ad, it is Apple Sign-In’s turn to protect user data within its eco-system’s mobile apps.

Apple will undoubtedly continue its initiatives in this direction, thus strengthening its position as the white knight of GAFA privacy and transforming it into a real marketing argument to keep on selling its devices and services. Let’s see what Google and Facebook have to say about this…

Of course, you can find the entire keynote on Apple TV, Apple Podcasts but also here. Enjoy!